After years of assuming his excruciating leg pain was arthritis, John finally saw a doctor he was not only given a diagnosis, but he was also given hope.

At John Brindley is a 66-year-old church choir singer who loves living in the small town of Indianola, Mississippi.

There were certain times where John would feel very lethargic. Even walking down the hall of the church would become a major ordeal for him to do. The pain in his legs had gotten so bad that he had completely stopped tracking his steps because they were so low.

As his legs worsened, walking went from a tiring activity to being nearly impossible at times. He would walk as far as he could and have to stop at the closest place to sit.

Worsening leg pain
At first, John confused his symptoms with his legs falling asleep. John would tell his wife that he couldn’t stand because he leg was asleep and would start hitting the side of his leg to try to get some blood flowing to it. It took him over five minutes to be able to stand.

John went from a very active person to someone who couldn’t walk very far without intense pain, and this quickly diminished the quality of his previously busy and active lifestyle.

John began missing days of work because he couldn’t leave his home. One day during church, John’s pain got so bad that they had to carry him out and take him home because he legs couldn’t function.

But without any ideas of what was causing his symptoms, he was left in the dark as to what was wrong with him. John said, “the unknown of not knowing what you have is a terrible feeling.”

The unknown of not knowing what you have is a terrible feeling.”

John, like many PAD patients, had wrongly dismissed his leg pain and rheumatoid arthritis and though there was no solution for his suffering. However, after examining John, Dr. Bennet concluded that Peripheral Artery Disease (PAD) was the cause of the pain in his legs.

The day John got an official diagnosis for his leg pain, he went back home with his wife and they both cried tears of joy because they knew that his Peripheral Artery Disease was treatable.

The treatment Dr. Bennet proposed was a Lumivascular procedure. With the Lumivascular technology, he would be able to see inside John’s arteries as he went through them with the camera that is attached to the technology.

John was in. He was willing to do anything that would give him the best results and the best opportunity to get his lifestyle back.

Dr. Bennet saw that John was a great candidate for the Lumivascular procedure and thought they could get a good result because they could feel comfortable when going through his arteries because of the imaging capabilities. 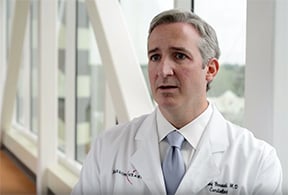 In past procedures without the Lumivascular imaging to guide them through the artery, the doctor would think they were going in the right direction only to discover that they were way off when it came to the re-entry point. But now with the imaging, Dr. Bennet knows that even if you think you’re off, you can look at the imagining to see that you’re exactly where you’re supposed to be.

Back to His Active Lifestyle
Dr. Bennet was able to complete the procedure without any complications along the way. Even laying in the hospital bed after the procedure, John immediately could feel the difference. It felt like he had lost 20 pounds in that leg. John told Dr. Bennet, “the energy of that leg was so much more powerful, it just feels better, it feels stronger.”

The energy of that leg was so much more powerful, it just feels better, it feels stronger.”

In the end, there are so many people like John Brindley that live with the pain and don’t know what the cause of it is. With a simple hospital visit, John was not only diagnosed with Peripheral Artery Disease but also learned that he doesn’t have to live with this suffering in his legs any longer.

After years of suffering from undiagnosed PAD, John is thrilled that he can walk again. He hasn’t felt that lethargic feeling since his Lumivascular procedure.

John’s loving the energy and freedom he has gotten back, he is exercising now more than he ever has and walking every day. Because of this treatment, John is happier and more active than ever because the Lumivascular procedure truly gave him his life back.

If you are suffering the symptoms of peripheral artery disease or told you need an amputation, a minimally invasive Lumivascular procedure can help establish blood flow to your legs and feet.  To find a Lumivascular doctor near you, click here to find a doctor.

Find a Lumivascular physician in your area.